Pasteur Hills, Meghalaya, Shillong was set up in the year 1981.Pasteur institute was established in 1915. The laboratory started as combined Food & Drug Laboratory, as to cater to the needs of the public and society, which laid by the Government of India in statutory guideline viz; Prevention of Food Adulteration Act 1954. Later with the implementation of Food Safety and Standard Act.2006, with effect from 5th August 2011 the Food Testing Laboratory is separated and functions as State Food Testing Laboratory, Pasteur Hills, Shillong under the Commissionerate of Food Safety, Meghalaya, Shillong. 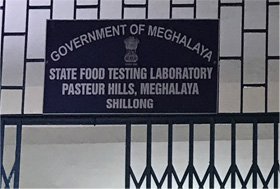 i. Microbiology unit: It is a testing unit used to detect the bacteriological contamination of Food and water samples brought to the laboratory in order to know if the samples are free from any microbiological contaminant or presence of pathogens. This unit helps us to determine whether the food sample is safe and fit for human consumption. The unit have also been handling food poisoning and other food outbreaks cases in Meghalaya.

ii. Chemical unit: The unit basically analyzes the chemical content or concentration including the pH present in the various food products and water samples